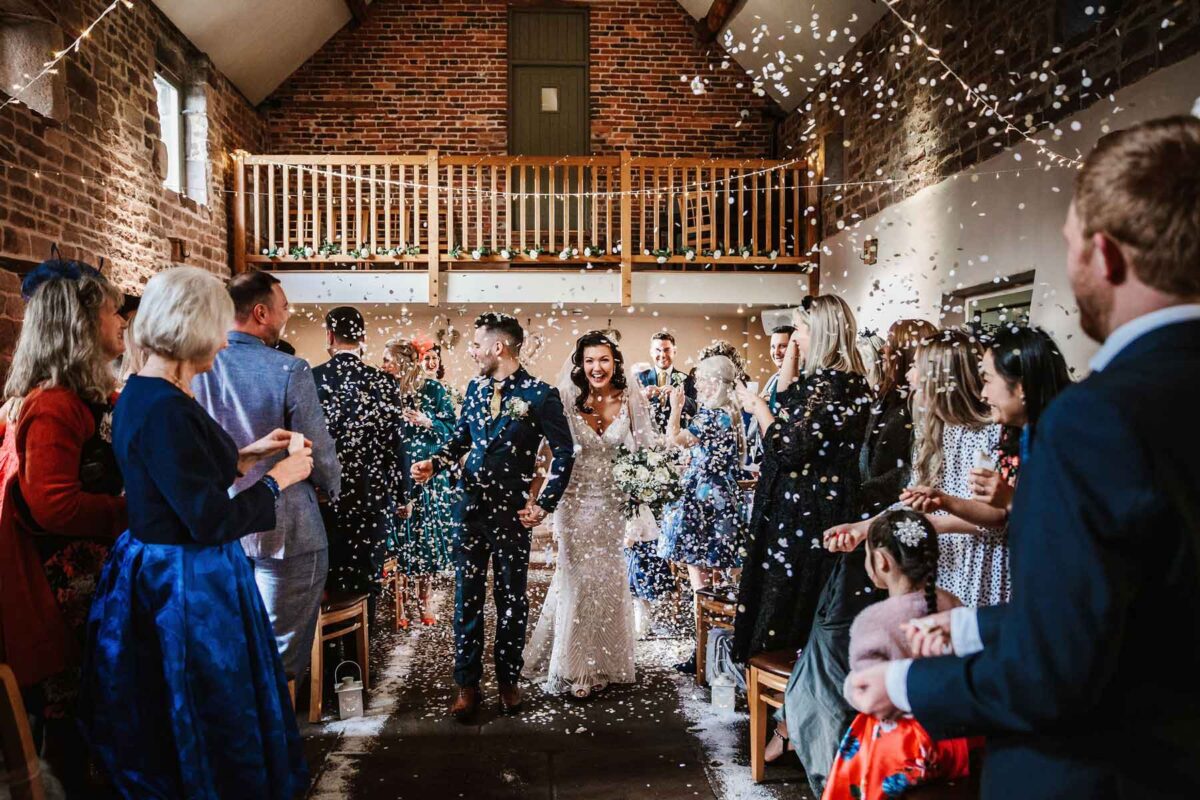 At The Ashes Barns Wedding Venue

If you are looking for the perfect place for your own Themed Wedding in Spring, Summer, Autumn or Winter, The Ashes Barns Wedding Venue looks incredible all year round. In February of this year it made the perfect setting for Sarah and Paul's Alpine Themed Wedding. So we sat down with our beautiful bride Sarah, to learn all about her special day and how she crafted her Alpine Themed Wedding using articial snow, ski boots, trail maps and lots more. Creating a winter wonderland for their lucky guests to celebrate with glasses of Glühwein.

How Did It All Begin?

Paul and I have been together for over 11 years. We met on the first week of university have been best friends ever since. I knew straight away that I loved Paul and that he was 'the one' from the moment I saw him across the Student Union. As cheesy as it sounds, it truly was love at first sight!

After being together for such a long time, everyone is waiting for your engagement, particular after every holiday we took together. But all that I wanted was that if Paul was going to propose, that it be a complete surprise.

He didn't dissapoint, as half way down a piste in Andorra I got the surprise I had hope for!

I had spotted that Paul had pulled up at the side of the mountain, so I boarded over to him, he gestured as if he was trying to show me something. Before I knew it, he was down on one knee in the snow asking me to marry him. After about 10 minutes of asking 'Are you joking?' I eventually emerged from my state of shock to say 'YES'.

We sat on the side of the mountain together, chatting about him asking my parents, amongst other things for at least an hour, as the engagement ring glistened off the sun and snow.

It was truly perfect (beside my helmet hair and goggle marks), I couldn't have wished for anything more!

The Ashes Barns was the most perfect venue for our Themed Wedding! It looks incredible, fitting in perfectly with our theme and weabsolutely loved being in one place for the whole day. The barns and the grounds are stunning, and the people you deal with are amazing. I would highly recommend The Ashes Barns Wedding Venue!

We had Stephanie as our Wedding Specialist, and she was literally THE BEST, we clicked with her as soon as we met! She truly understood us as a couple and the vision we had for the big day and was just a wonderfully happy person, which suits us perfectly. On the wedding day, she was amazing. She helped in every possible way, she was like a secret ninja, topping up the sweets and macarons so discretely. She was there from the start to the very end of the day, making sure it was all going smoothly. We couldn’t have wished for anyone more perfect to organise our big day!

Also, a big shout out the caterers as the food was fantastic! We had so many comments about how good the food was. My Aunty described it as the best meal she has ever had, and that’s praise indeed!

There was so much choice, you could really tailor the perfect menu to your day, and even with numerous dietary requirements, nothing was too much hassle for them.

Every part of the meal was delicious. Especially the brownie! That went down well with absolutely everyone! 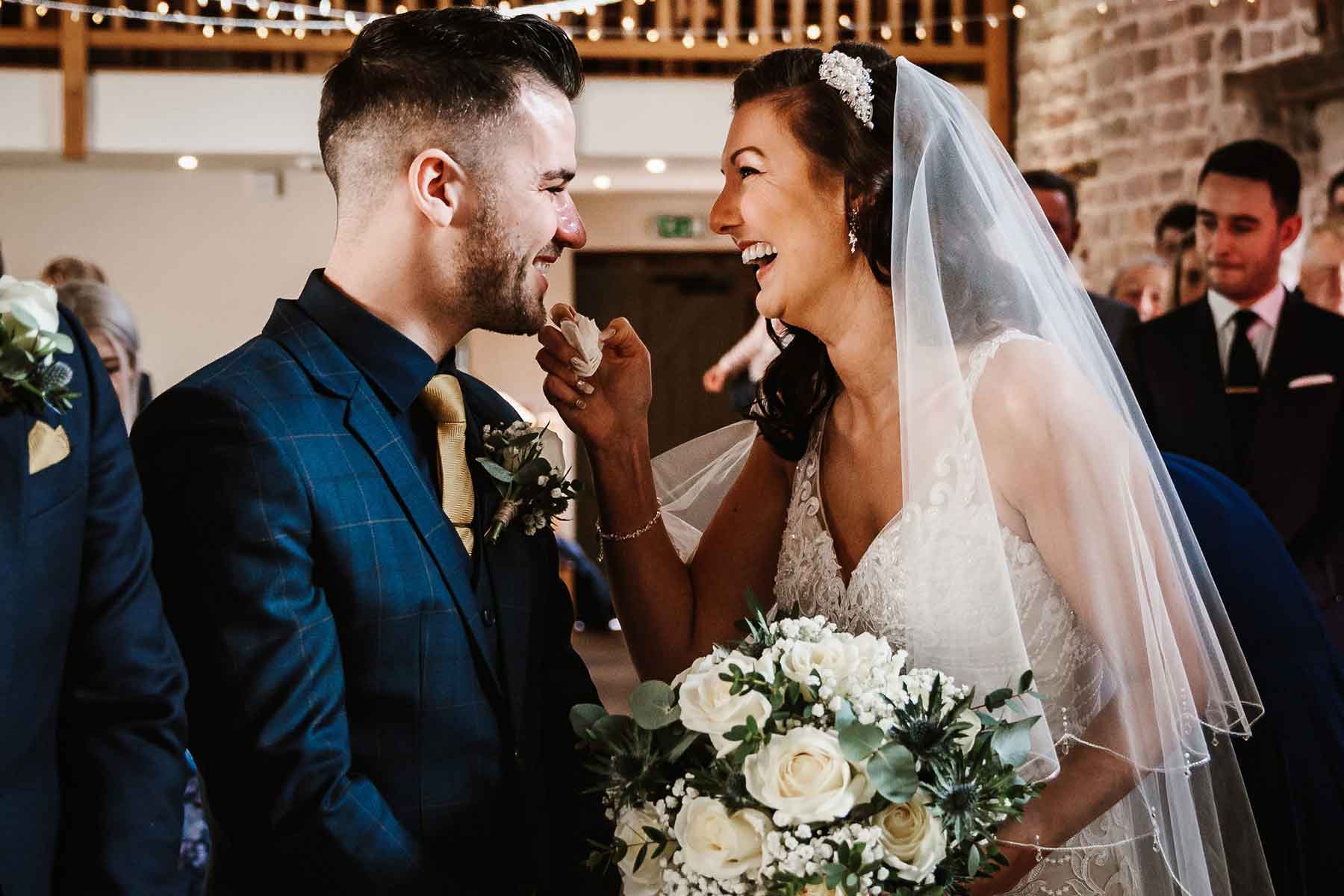 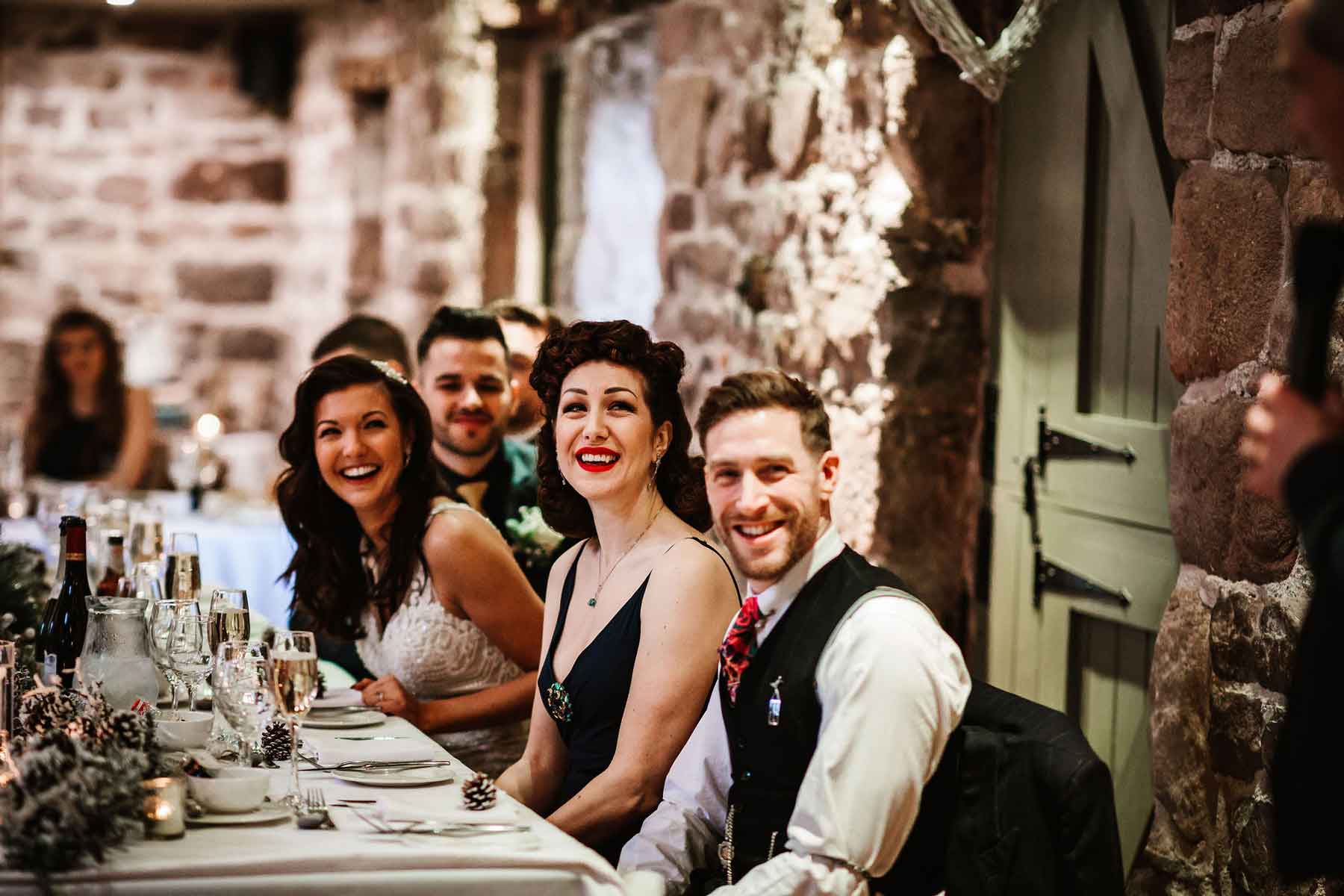 How Did You Choose Your Theme?

As we got engaged on the side of a mountain and snowboarding is our favourite hobby, we thought it would be fitting to have an alpine/apres ski Themed Wedding.

The table names were from old vintage ski postcards, the table plan was made with the piste map of the resort we got engaged. Our wonderful brother-in-law made us a ski shot for all the guests to enjoy as their wedding favours. We also had a traditional apres ski game for our guests to play during the drinks reception whilst glugging Glüwhein.

We wanted our wedding to be a fun filled day, we wanted people to feel comfortable and just have a really good time. From all of the comments that we have received since, I think we got exactly what we hoped for.

How Did You Make The Venue Your Own?

The apres ski/ alpine theme made it very much our own, with the table plan being the piste map where we got engaged, the bespoke made cake topper that was alpine themed, the ski shot etched with our initials and the snow down the aisle.

We put a lot of effort into the smaller details to really encapsulate us as a couple into our Themed Wedding and we are so happy that we did.

What About The Flowers?

We used 'Blossoms', a local florist in Leek and the Flowers were perfect and everything we wanted!

we had simple & elegant white flowers with a few thistles and I still had my bouquet going strong a week and a half later! My sister also loved them as they reminded her of the flowers from her wedding and Paul loved the thistles which tied in to his Scottish heritage.

Tell Us About The Outfits!

Paul's suit happened to be from a tailors in Thailand- whilst on a tuk tuk tour we were dropped off at a tailors shop, and thought why not- lets get it tailor made! I work in clothing so was having a great time picking out fabric, linings and silhouettes.

My dress was from The Bridal Rooms in Uttoxeter, Gayle was wonderful and really helpful. The hardest part was choosing between so many beautiful dresses. I felt the most comfortable in this bridal shop and just loved every minute of spending the afternoon trying on gorgeous dresses. Special mention to my seamstress Elisa who did a wonderful job with the alterations, the dress fit perfectly!

I saw Paul's suit but there was no way he was seeing the dress, although I think he had a good idea of what I would go for in terms of fit.

Did You Have Any Entertainment?

We decided that we wanted a band to play in the evening of our Themed Wedding and what a night! The Pedal Tones kept the dancefloor full for every set and we have had so many comments on how good the band was. We had the absolute best time, and seeing my dad air guitar across the dance floor is probably the best thing I have ever witnessed! The guys are incredibly talented and we are so glad they performed on our big day. Being a local band in Cheshire, we were lucky enough to see them a few times before the big day, and we will continue to watch them. I would recommend these guys to anyone and everyone, they really brought the party to life!

We also used MTR productions for their photo booth, The service they provided was brilliant and everyone loved it - we have some amazing pictures from it.

Who Was Your Photographer?

We chose Ally M Photography because we wanted natural photography that captured the feeling of the day, with less staged photos. Ally did just that. We only took 10-15 minutes out to do group shots and a little bit of time doing couple shots, but they weren’t staged at all. We felt so comfortable with Ally. During the day, you didn’t notice he was there. We have our photos now and we absolutely love them- they are everything we wanted. 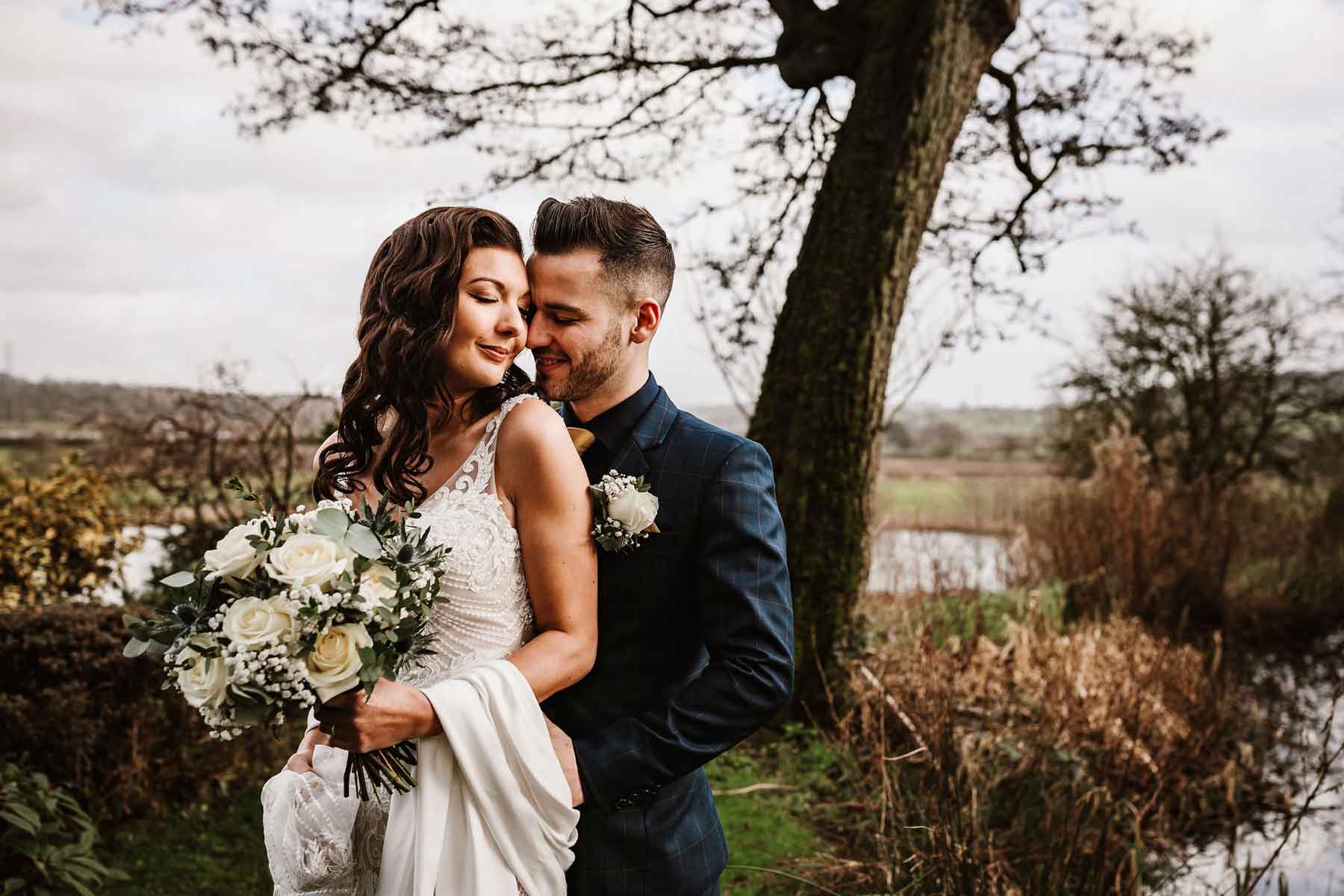 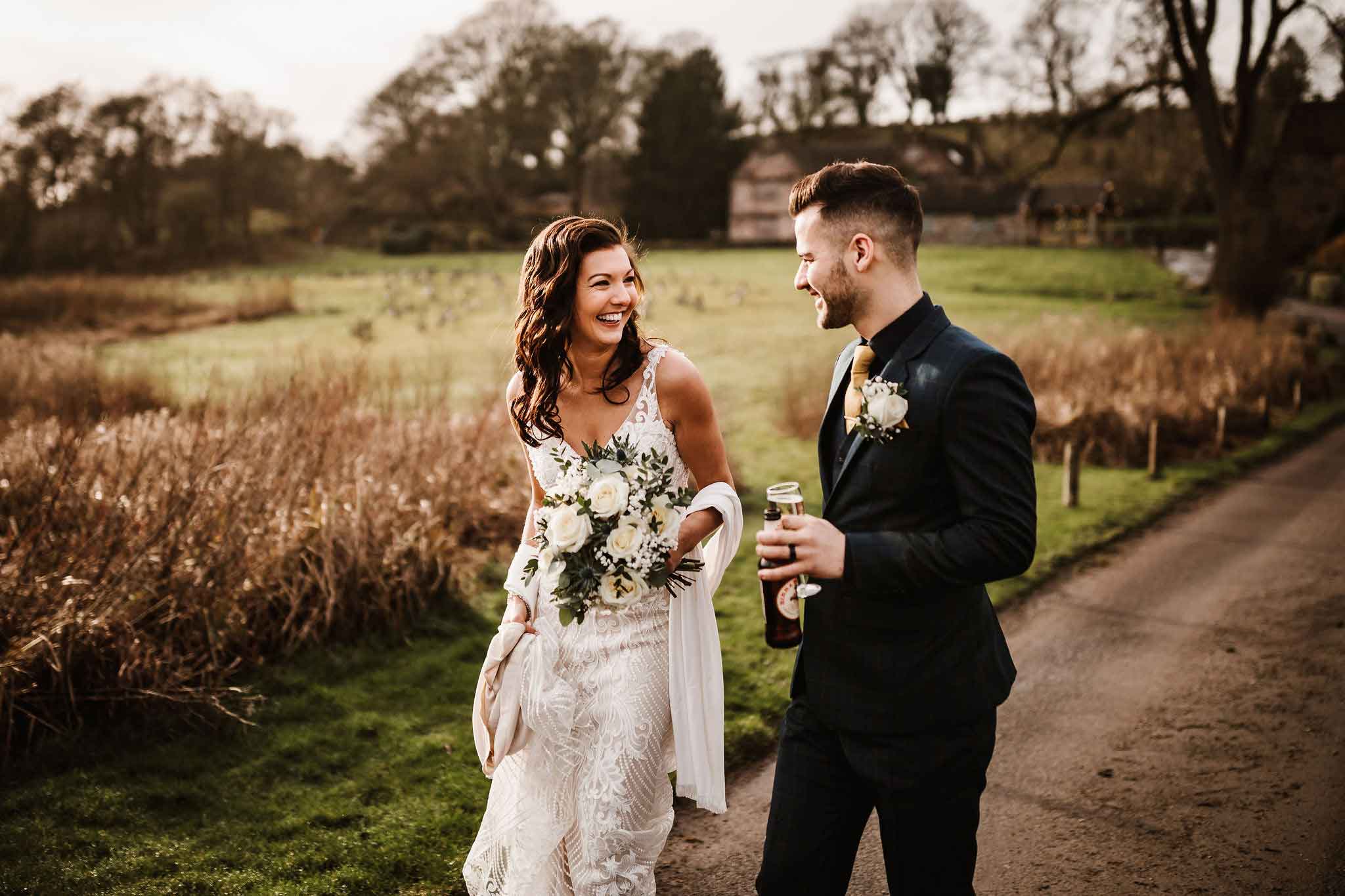 What Were Your Best Bits?

We had the most wonderful time! every single part was amazing, I couldn't choose a favourite!! Every single supplier was incredible, everything on the day went so smoothly, and everyone had the best time which is what we always wanted. Our Themed Wedding was everything we had dreamed of and more. We want to say a big thank you to everyone involved. Especially my parents, bridesmaids, the best man, the master of ceremonies, the snowgirl and most of all… my new Hubby who has made me the happiest girl alive!

Do You Have Any Top Tips?

Just to enjoy the process, from the planning and all throughout the big day. Don't let anything stress you out too much. Expect that things will change, someone may not be able to come last minute, the weather may not be what you had hoped for, but at the end of the day, the only thing that matters is seeing the one you love at the end of the aisle.

And I know its really cliche but it really does fly by on the day so enjoy every single minute!! 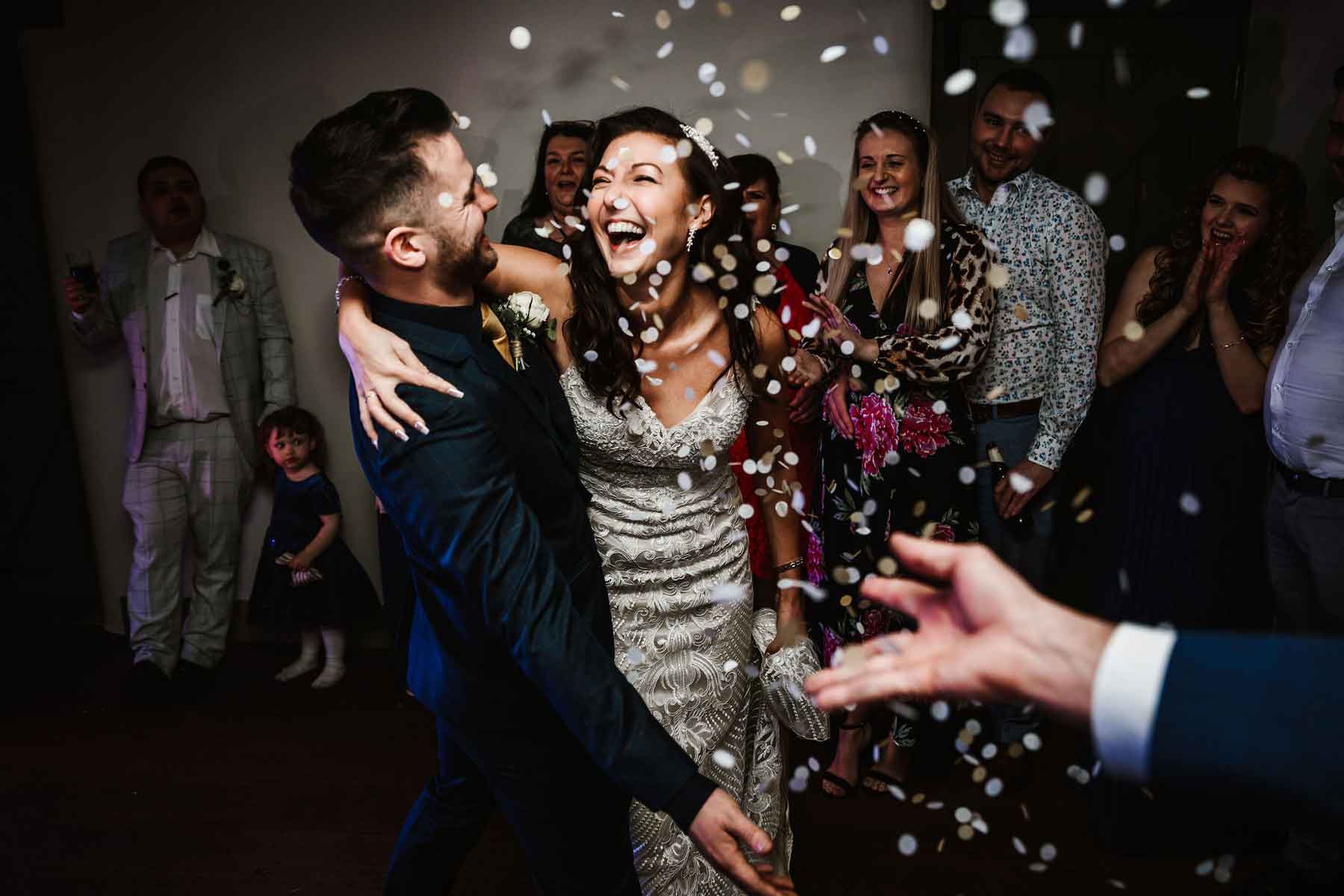 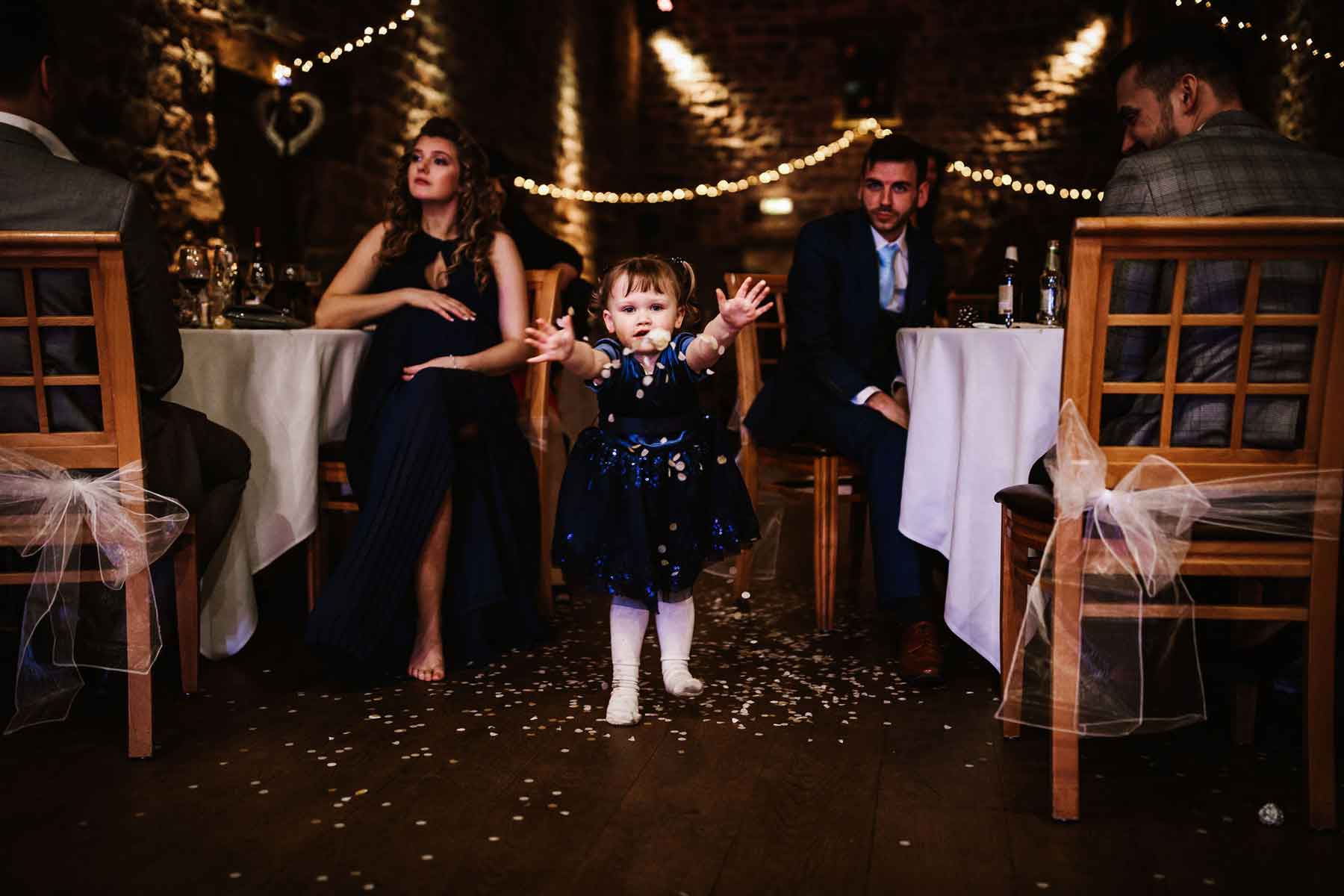 Request a Brochure
Contact Form
Guest Info
Arrange a Visit
We use cookies on our website to give you the most relevant experience by remembering your preferences and repeat visits. By clicking “Accept All”, you consent to the use of ALL the cookies.
Accept Read More
Manage consent

This website uses cookies to improve your experience while you navigate through the website. Out of these, the cookies that are categorized as necessary are stored on your browser as they are essential for the working of basic functionalities of the website. We also use third-party cookies that help us analyze and understand how you use this website. These cookies will be stored in your browser only with your consent. You also have the option to opt-out of these cookies. But opting out of some of these cookies may affect your browsing experience.
Necessary Always Enabled
Necessary cookies are absolutely essential for the website to function properly. This category only includes cookies that ensures basic functionalities and security features of the website. These cookies do not store any personal information.
Non-necessary
Any cookies that may not be particularly necessary for the website to function and is used specifically to collect user personal data via analytics, ads, other embedded contents are termed as non-necessary cookies. It is mandatory to procure user consent prior to running these cookies on your website.
SAVE & ACCEPT